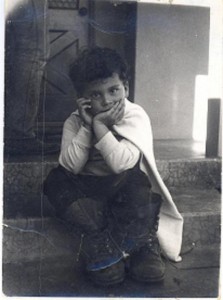 Philip Metres is the author of ten books, including Shrapnel Maps (Copper Canyon, 2020), The Sound of Listening: Poetry as Refuge and Resistance (University of Michigan, 2018), Pictures at an Exhibition (University of Akron, 2016), Sand Opera (Alice James, 2015), and I Burned at the Feast: Selected Poems of Arseny Tarkovsky (Cleveland State, 2015). His work—poetry, translation, essays, fiction, criticism, and scholarship—has garnered fellowships from the Guggenheim Foundation, the Lannan Foundation, the National Endowment for the Arts, the Ohio Arts Council, the Watson Foundation. He is the recipient of the Adrienne Rich Award, three Arab American Book Awards, the Lyric Poetry Prize, and the Cleveland Arts Prize. Metres has been called “one of the essential poets of our time,” whose work is “beautiful, powerful, magnetically original.”  He is professor of English and director of the Peace, Justice, and Human Rights program at John Carroll University. He lives with his family in Cleveland, Ohio. Follow him on Twitter and Instagram @PhilipMetres

Born in San Diego on July 4th, 1970, the son of a Lebanese American Vietnam Veteran and a ex-convent novitiate of Irish and German extraction, Philip Metres grew up outside Chicago, attended Loyola Academy and College of the Holy Cross, and spent the following year in Russia on a Thomas J. Watson Fellowship pursuing an independent project called “Contemporary Russian Poetry and Its Relationship to Historical Change.” Since receiving a Ph.D. in English and an M.F.A. in creative writing from Indiana University in 2001, Metres has written and translated over fifteen books and chapbooks, including Shrapnel Maps (forthcoming 2020), The Sound of Listening: Poetry as Refuge and Resistance (2018), Pictures at an Exhibition (2016), Sand Opera (2015), I Burned at the Feast: Selected Poems of Arseny Tarkovsky (2015), Compleat Catalogue of Comedic Novelties: Poetic Texts of Lev Rubinstein (2014), Concordance of Leaves (2013), abu ghraib arias (2011), Ode to Oil (2011), To See the Earth (2008), Behind the Lines: War Resistance Poetry on the American Homefront since 1941 (2007),  Instants (2006), Catalogue of Comedic Novelties: Selected Poems of Lev Rubinstein (2004), and A Kindred Orphanhood: Selected Poems of Sergey Gandlevsky (2003).

His work has been called “beautiful, powerful, magnetically original” (Cleveland Arts Prize citation). Lawrence Joseph has written that “Philip Metres’s poetry speaks to us all, in ways critical, vital, profound, and brilliant.” His poems have been translated into Arabic, Farsi, Polish, Russian, and Tamil.

Were it not for the Ellis Island effect, his last name would be Abourjaili.