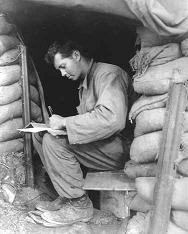 “War and Literature” (EN299) investigates literature that responds to modern warfare.  Though war literature flowered in all its terrible beauty with the work of World War I soldier-poets, this course investigates war literature that also moves “behind the lines,”—that is, beyond the experience of the soldier at the scene of battle.  This course provides a broad variety of perspectives on war written in poetry, fiction, and non-fiction, from early Greek epigrams to political cartoons such as “This Modern World,” from Japanese-American internment camp haiku to the movie “Three Kings.”

In considering these texts, we trace certain dominant themes that persist through these texts: Can one represent the totality of war, a phenomenon that may be beyond any individual’s experience? How have bureaucracy, technology, and the military-industrial complex altered the way war is experienced by soldiers and civilians?  How to write about traumatic experience?  How do writers deal with and represent the “other”—those of other nationalities, races, genders, etc.?  How does war literature deal with why war happens?  How has 9/11 changed our discussions and definitions of war?  Is war literature inherently anti-war or pro-war?  How have writers resisted war through writing?  Is there such a thing as a literature of peace, and what would it look like?

The capstone project for my course requires students to interview a war veteran–that is, anyone who has been affected by war–and analyze the oral narrative in relation to war literature from the course.